Talk about whatever piece of gear you want - strings, picks, straps, whatever.
Post Reply
8 posts • Page 1 of 1

I recently bought my second Caparison and since I don't use the trem, I've blocked my other Floyd Rose equipped axes with a piece of wood between the trem block and the body of the guitar. This time however, I thought I'd try a more "pro" approach, so I went with the "Tremol-No". 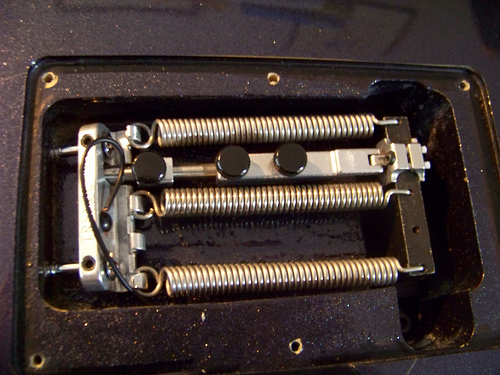 Now, after successfully installing the seemingly sturdy little device, I notice that the tiny hinges where the clamp is attached to the main rod, are not 100% "tight" - when bending the strings as little as a half note, it makes a clicking "metal-to-metal" noise which is very annoying!

Has anyone else had the same problem, and/or have any ideas on how to fix it?
Human Desolation - http://www.humandesolation.com
Top

I have no experience with them (9V wrapped in tape), but it looks like the clamp piece has some sort adjustment there that needs an allen key.
Top

tighten the clamp and it should be fine dude

TLITD69 wrote: Kirk's terrible, Metallica suck, sold out, are sue-happy, haven't made any impact on anyone, and generally shouldn't even make music...

Hey guys, thanks for your replies!

However that's not the problem... it's the tiny hinge just below the equally tiny allen screw that tightens the grip on the claw that has a bit of slack. This slack gets more serious as there's quite a bit of momentum in the bridge itself, so if you pull the bridge upward (by bending the strings, etc) it becomes very audible as the "clicky" noise it makes resonates throughout the body of the guitar.

There's no screw to tighten this so I can't really see a solution to the problem, but was generally wondering wether anyone has had the same problem and worked out a way to fix it, like using tape, soldering it shut or whatever?

I had the exact same problem with one of my T-No's. It seems the pin in the hinge is a wee bit too small. Kevan never answers on the Tremol-No forum anymore, so I contacted him through Facebook. He told me that I should write him back with a description of the problem and then he would send me new parts. I did that, but never heard back from him and now he's not answering... This was my third T-No, so I know my way around them. I ended up buying a new one that doesn't have the problem. The problem in my case was that I had it lying in a drawer for six months before installing it, so I figured the store where I bought it would just assume that I broke it. In the future I will check the units when I recieve them to make sure they are ok.

You could try contacting Kevan or allparts or returning the unit to the store. It's a real problem and I don't see how it can be fixed without replacing the part.

I shot this clip when I contacted Kevan:
http://www.youtube.com/watch?v=h8adDwJV ... t_received" onclick="window.open(this.href);return false;

For permanently blocking a trem, the tremol-no is IMO not a very good choice. Blocking with wood or metal will be much more sturdy and a lot cheaper. If you don't mind a couple of holes, then a Trem Stopper from FloydUpgrades is also a good choice. However, if you are often going from floating to blocked, then the T-No's great.

Edit: I finally got hold of Kevan, so the problem is now solved. Hurray for Kevan.
Top

Havent had one of the tremel nos but have heard alot of varied opinion on them.

I had a similar problem with a T-No before, with a Jackson that I had ages ago.

I used to have an ESP M7 with one of those little bastards and it had the same problem. Using a 9V or block of wood avoids this and IMO sounds much better either way. I had lots of issues with the springs and unit still ringing out and keeping my noise gate from activating on recordings with the T-no still in place.
...because you can't spell "manslaughter" without "laughter"
Top
Post Reply
8 posts • Page 1 of 1